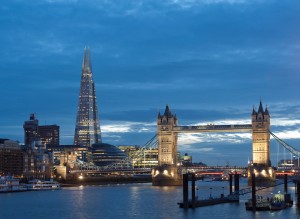 The Clink Prison museum is based on Clink prison which is considered one of the oldest prisons in London, the first notable evidence being in 1144. The prison’s owner was Bishop of Winchester, and was part of a larger complex called Winchester House. The most offenders in Clink Prison were from Southbank, which was a district known for the “perverse entertainment” that they offered. Visitors will have the opportunity to see with their own eyes the different torture methods on which the helpless criminals were subjected in medieval England. The museum can be visited daily between 10 am and 6 pm (on weekends between 10 am and 9 pm).

To have an overview of the city, you absolutely must find a height from which to watch over rooftops and feel a little closer to heaven. In London there are several possibilities, some more expensive, some cheaper. The most expensive option is the new symbol of the city – The Shard. If you are willing to pay £30 (£23.95/child), you can speed up a lift available until near the clouds and you can admire the city from a height of 244 meters. The Shard can be visited from Monday to Wednesday and on Sunday between 10 am and 7 pm, and Thursday to Saturday between 10 am and 10 pm.

Tower Bridge is a great symbol of London! It is spectacular and worth visiting by day and especially by night, when it is bathed in thousands of lights. Tower Bridge is also famous for its numerous appearances in many important films, over the years.