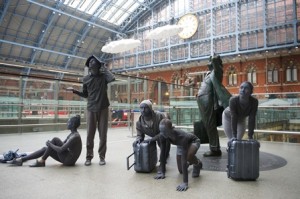 Gatwick to St Pancras Station Taxi – Gatwick to St Pancras Station Taxi Service: St. Pancras station is located on Euston road, in the London Borough of Camden. Its proximity to British Library, Regent’s Canal and King’s Cross Station made St. Pancras one of the busiest stations in London. It was opened in 1868 with a beautiful Victorian architecture. It is sometimes referred to “the world’s most wonderful railway station”.

Just across the street from St. Pancras station there is the entrance to King’s Cross Station (about 50 meters). Even though the two stations are operating in a separate mode, they have the King’s Cross St. Pancras Tube Station in common and some important routes that secure the interchange between the stations.

The area is highly developed, and since not so long ago, a new postal code was introduced, the N1C, which contains the King’s Cross St. Pancras Station and over more than 2000 new homes, 20 streets, 10 new public squares and half a million square feet of office space. The Guardian newspaper office is situated in this area and Google UK has plans to move its headquarters in King’s cross in the next years.

Both King’s Cross and St. Pancras stations are considered London landmarks due to their beautiful design and historical events. The area was previously known under the name of Battle Bridge. Since a statue of King George IV was built by the famous architect Lewis Cubitt in 1836, the sounding area that includes the two stations changed its name to King’s Cross. The name St. Pancras was chosen after a 14 years old Christian orphan that was martyred in Rome. His remains have been brought in London in the 7th century and can be found in St. Pancras Church in Canterbury.

London Gatwick Airport is 30 miles away from St. Pancras Station. If you want to travel by car, you have to take the M23 road to enter the city, then the A23 Road until Lambeth. You will then have to follow the north way and cross Waterloo Bridge. Once you get to Russell Square, the destination is only a couple of hundred meters away.

247 Gatwick Airport Transfer can always provide you with a taxi from Gatwick to St. Pancras Station. The price for a taxi to St Pancras Station from Gatwick starts from £58 and the journey can take up to one hour and 30 minutes, if we include any traffic delays that may occur during rush hour time.