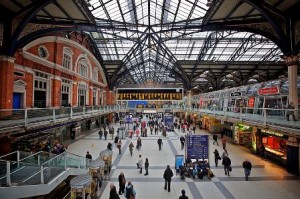 The Liverpool Street Station dates from 1874 and it replaced the Bishopsgate station. In 1917, during the First World War, Liverpool Street was hit by a bomber aircraft. It was the city’s first site to be bombed.

From 1985 to 1992, the station was modernised and improved and in December 1991, it was opened by the very Queen Elizabeth II. In the last couple of years, Liverpool Street Station featured no less than 57 million passengers. This includes it among the busiest railway stations in the country. Also, following Victoria and Waterloo, it is the third busiest station in the Capital. Network Rail is the manager of the station.

This great station has three exits: one to Bishopsgate, one to Liverpool Street and the last one to Broadgate development. The Underground station with the same name connects the following lines: Metropolitan, Hammersmith and City, Circle and Central. Liverpool Street is located in fare zone 1.