Euston railway station, also known as London Euston is managed by Network Rail, together with other 16 railway stations. Its most important long-distance destinations are Glasgow, Manchester and Birmingham, since its opening in the year 1837. The central location also adds a bit of flavor to its already acclaimed importance. 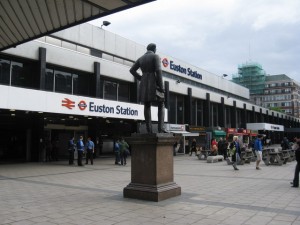 Ibis London Euston St Pancras is located near the Congestion Charge Zone, thus representing a peaceful place in one of London’s busiest area. Moreover, you are at a walking distance of many interesting tourist attractions, like the new British Library and the graveyard of St. James’s Garden. Thistle Euston Hotel is three minutes away from the station and close to Regent’s Park and the British Museum. Studios2Let Apartments North Gower Street is known for its modern allure. Its location is perfect if you want to take a quick shopping spree in Covent Garden or visit Madame Tussauds.

Euston station is also near to other important railway stations. King’s Cross Railway Station (Euston Road, King’s Cross, London N1 9AP) is famous for its part in J.K Rowling’s Harry Potter books. It provides service for Northeast destinations and Scotland. St Pancras International Station (Euston Road, King’s Cross, London NW1 2QP) is known for its great architecture and excellent restaurants and libraries. This is the departure spot for most Continental Europe trains. Paddington Railway Station (Praed Street, Paddington, London W2 1HQ) has developed over the years into a sort of airport complex, although it kept most of its original statues. It mostly provides service for Southwest areas.

In addition to the above stated railway stations, there are also other means of travel near Euston Station. Circular Hop-on Hop-off Trip – Crown River Cruises (Blackfriars Pier, City, The Old Pump House, London EC4V 3Q) gives you the great opportunity to cross the beautiful Thames river. In the course of one hour, you can see the Houses of Parliament, Big Ben, the Tate Modern and other interesting attractions. Serpentine Solar Shuttle (The Boat House, Serpentine Road, Hyde Park, W2 2UH) is an eco-friendly means of transport created by Christoph Behling, that helps you get from one end of the lake to the other. Thames River Adventures (Regent’s Canal, Primrose Hill, London N1 8JX) offers you innovative tours, by kayak. You can choose between different routes and also different time tables.

In order to get rail transport from London Gatwick Airport to Euston Station, you must take the Gatwick Airport Bus (that comes every 20 minutes) and then the tube from Victoria Underground Station that arrives every 5 minutes. The total journey would take about 37 minutes.

Transfer from Gatwick to Euston Station: